A hybrid car has two motors, a combustion engine and an electric motor. There are two types:

Now that you know the basics, you probably have a million questions about these vehicles, right? There are many preconceived notions out there about hybrids, so let’s clear up some of the myths.

With the growing demand for this type of vehicle, manufacturers are adapting, products are multiplying and competition is growing—to your benefit! For example, the Toyota Prius C has a base price of $23,190, while the Ford C-Max starts at $24,044, which is competitive for the technology in that segment. What’s more, the savings in gas and maintenance costs are quite significant from year to year when compared with similar-class gas powered vehicles.

Myth 2: Hybrid cars don’t really make that much of a difference for the environment

Because hybrid vehicles use less gas, they emit less CO2 in the atmosphere than gas-powered vehicles in the same class thereby significantly reducing urban smog.

The electric motors used for plug-in hybrid vehicles are different in that they have exceptional acceleration power. The technology for these vehicles is constantly improving and has been road tested under all types of conditions. Some manufacturers, like Toyota, are already on their third or fourth generation of hybrids.

The gas engine in a hybrid car doesn’t work all the time, which slows wear. The brakes are supported by an electromagnetic system that reduces premature wear. Did you know that the Toyota Prius is ranked among the 10 best cars to get to 200,000 miles and beyond by Consumer Reports? And when it comes to repairs, replacement parts are becoming more affordable, especially since hybrids have been gaining popularity.

Myth 5: The batteries in hybrid vehicles need to be replaced often.

Quite the contrary! Hybrid batteries are designed to last many years, even as long as the car itself. Manufacturer warranties cover the battery life for a long period, up to 10 years for Toyota. 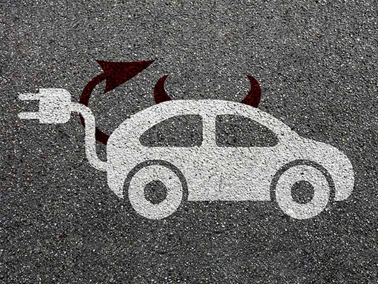 Are you thinking about trading in your old gas guzzler for a more eco-friendly ride? Hybrid vehicles are a great compromise between a traditional gas car and a fully electric model. Hybrid options are becoming increasingly popular because they combine energy efficiency and autonomy. Viewed by some as the vehicle of the future, and by some as something out of a sci-fi movie, hybrids definitely deserve a closer look.