To help you stay safe through the colder months and avoid a potential car insurance claim, we’ve put together a list of the top winter driving myths – and why they’re incorrect.

Myth #1: All-Wheel Drive is Enough to Keep You Safe

All-wheel drive is an excellent performance feature in modern cars. By identifying which wheels have the most traction and putting more engine power in them, all-wheel drive can help a car to accelerate significantly faster than a traditional two-wheel drive model. However, the feature does little to help a vehicle steer better, and it won’t help a car to stop faster in a short distance. Because all-wheel drive can divert engine power to the wheels with the most traction, it can serve to mask how slippery a road really is, according to Wheels.ca. This means that a driver can more easily get into a difficult driving scenario if he or she isn’t being careful.

Myth #2: There’s No Need to Get Winter Tires in the City

While cities may often be better plowed than other regions, it is still definitely worth investing in snow tires.

“Most people think a winter tire is just for ice and snow, but it is better performing on cold pavement,” director of Bridgestone Winter Driving School Mark Cox told Accuweather.com.

Under 7 degrees Celsius, winter tires simply get better traction – even on dry pavement. That means shorter stopping distances and better turning for emergency situations. As Wheels.ca pointed out, those who refuse to install winter tires in the city are likely the same people holding up traffic because their car can’t make it up a hill.

While it’s true that in slippery conditions, Anti-lock Brakes Systems can slow your stopping time, the system more than makes up for this fault by giving you added control, according to DrivingFast.net. ABS is a proven safety feature, and it isn’t designed to decrease stopping distance as it is to avoid “wheel-lock.”

Before the invention of ABS, drivers were instructed to use cadence braking – in which the brakes are rhythmically applied and released – in order to stop while maintaining control of the vehicle. ABS does this much faster and with more precision, allowing you to steer to avoid obstacles in your path while the car comes to a stop.

Myth #4: Under-Inflated Tires Are Better in the Snow

It isn’t clear how this myth got started, but it is absolutely false. Under-inflated tires take away from traction, performance and safety. Because air pressure is related to temperature, your tires are already losing about one pound of pressure per square inch for every 5.5 degree drop Celsius. Make sure that your tires are properly inflated to the level recommended by your manufacturer.

Myth #5: You Should Turn Off Traction Control in Snowy Weather

In most snowy conditions, it is extremely beneficial to keep traction controls in place to improve traction with the road. These systems apply either engine braking or traditional braking in response to spinning tires, helping you to avoid losing control when roads are slick. The technology in place is quite efficient at maintaining traction with the road – more efficient than most humans, according to DrivingFast.net.

The only situation in which it really makes sense to turn off traction control is when your car cannot move at all because it’s stuck in a snow drift. In this case, your wheels spinning fast is more or less inevitable, and traction control systems can make it hard to get out. If this is the case, turn the system off while you’re getting your car unstuck, and then turn it back on for regular driving.

Myth #6: You Should Put the Car in Neutral When You Start to Skid

According to Wheels.ca, there are a few situations in which putting the car in neutral is a good idea, but the majority of the time, neutral will just leave you with less control of the vehicle. A rear-end skid in a front-wheel or all-wheel drive vehicle, for example, actually requires the driver to accelerate in order to brake the skid. There are a variety of skids that call for different responses in various vehicles. Taking a class at a winter driving school will help you to learn how best to control your vehicle, and may even reduce your car insurance premiums.

Myth #7: Warming Up Your Vehicle Will Lead to Better Safety

Other than warming up your fingers when you first get into the car, a warmed up modern vehicle doesn’t perform significantly better than a cold one, and will just lead to wasted gas and more wear on the car. With the new synthetic oils used in modern cars, even on the coldest days of a Canada winter, you don’t need to idle for more than 15 seconds before you can start driving. 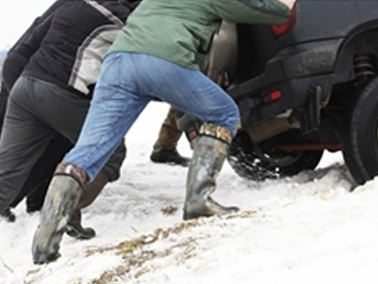 We’ve all heard our fair share of winter driving myths. The level of misinformation out there about driving in the snow is shocking.