As a race car driver for over 20 years, Alexandre Tagliani clearly loves to drive. And yet, he says he really doesn’t have much of a choice. “I get motion sick whenever I’m a passenger! I’m a careful driver. I take enough risks in my job. I’d say I just drive to get from point A to point B. No Sunday driving for me, that’s for sure!”

As the only woman to take up the Ajusto Challenge, Mélanie Maynard freely admits she’s not crazy about driving. “For me, driving is a necessity. I didn’t get my license until I was 25—and then only because I had to. I can be pretty distracted behind the wheel. My mind tends to wander. Sometimes I’ll be waiting forever behind a stopped car before realizing it’s actually parked!”

As for Charles Lafortune and Dominic Arpin, they enjoy getting behind the wheel. In fact, both men share the same dream of taking a road trip through California wine country.

“I love driving! I got my license at 16. I was a little guy from the suburbs, and being able to borrow my mom’s car meant freedom,” said Charles Lafortune.

“For me, driving is my time to relax and listen to music or just think about things,” said Dominic Arpin. “I’m a good driver, but I may sometimes drive a bit faster than I should on the highway,” he admitted.

What was your first car?

Have you ever run out of gas or had a break down?

AT: The only times I’ve been stuck were when I decided to push my luck a little too far with gas. I see it as a challenge to log as many miles as possible on a full tank—just like when racing. So yeah, I know what it’s like to be stranded on the side of the highway with a car that wouldn’t start.
DA: Breakdown? Not exactly, but I once had to drive a few hundred metres in reverse when I got lost in a small town in Italy. My kids and girlfriend were not thrilled!
MM: Twice when I overestimated how far my car would run with the gas gauge on empty. It’s even more embarrassing the second time...
CL: I must have been 21. My car broke down right as I was about to enter the Louis-Hippolyte LaFontaine bridge-tunnel. I had to hitchhike to my cousin’s house on the South Shore.

What do you hate most when you’re on the road?

AT: I don’t know if “hate” is the right word because there are so many more serious things in life, but I don’t like it when people cause traffic jams because they’re too laid back, too curious or just plain bad drivers. It drives me crazy.
DA: Traffic jams! I go nuts whenever I get stuck in bumper-to-bumper traffic for a long time!
MM: For the last year or so, it’s all the detours and traffic caused by construction.
CL: People who drive 80 km/h in the left lane on the highway; people who don’t check their blind spots; people who tailgate; and people who think they’re Alexandre Tagliani. I’m like, “If you don’t have sponsors and don’t get a bottle of champagne and a trophy when you get home, you’re not a race car driver!”

How well do our four personalities know the rules of the road? We gave them a little questionnaire to put their road safety knowledge to the test. Would you pass the test? 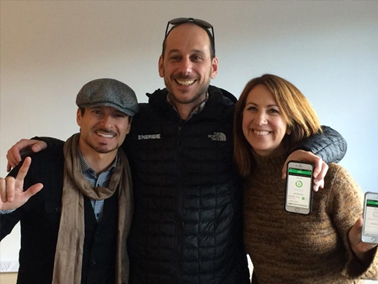