Skip to Content
null
null How to handle pothole-infested roads

The passing of another winter and the arrival of spring brings with it a number of reminders for Canadians. While some of these are personal, others are more practical, such as remembering to turn the clocks ahead an hour, changing the batteries in the fire alarm or updating a recently expired group auto insurance coverage plan.

This time of year also conjures up memories of what the roads can be like, as due to the freeze-thaw cycles of winter, water seeps under the country’s streets, creating potholes that are often physically jarring after running over them.

With this in mind, Wheels.ca’s automotive expert Ian Law offers some suggestions for how to avoid these potholes and mitigate the effects they can have on a vehicle’s ability to ride smoothly.

Perhaps the easiest thing to do is to keep an eye out for where potholes lurk. That said, because this prevents drivers from being able to see what’s ahead – as constantly looking down limits one’s field of vision – Law says it’s crucial not to keep looking downward. Glancing briefly will enable drivers to see an impending pothole while at the same time what’s beyond that point.

It’s never a good idea to tailgate, as it leaves the trailing driver with a small amount of time to lay on the brakes if the leading car comes to an abrupt stop. But it’s particularly important during pothole season, as it makes it impossible to see the holes as they approach. Law says motorists should try to stay at least two to three seconds behind the car that’s the nearest to them.

Occasionally, a pothole is so big that hitting it could impact the shock system of the vehicle. If there are no other cars in the oncoming vehicle, it’s fine to slightly veer into the other lane. However, any violent swerves that causes the car to drift too far into the other lane is extremely dangerous and may cause a chain reaction if trailing cars react. In short, Law says that drivers should avoid potholes with a smooth and steady turn of the wheel.

Potholes can come in many different shapes and sizes, depending on how much water has crept underneath the surface of the street and how old the pavement is. After a significant storm, water can make it appear as though a pothole is small when in reality it’s quite large. As tempting as it may be to splash through a water-filled pothole, Law recommends avoiding them just as one would for any other significant divot in the road.

Due to high congestion or the pace with which traffic is moving, there may come a time in which potholes are unavoidable, where no matter how hard one tries, they have to go through the depression in the street. With any luck, the pothole will be a shallow one, but either way, Law says drivers should reduce their rate of speed as smoothly as possible.

“This will reduce the load on the suspension and the impact force,” said Law.

Get ready for the “BUMP”

The Globe and Mail’s automotive columnist Andrew Clark has some tips of his own for how to deal with potholes and motorists can remember it through mnemonic device known as “BUMP.”

“B” stands for “Brace yourself.” This is similar to what Law recommends, as bracing is another way of saying preparing, which can be done by lowering one’s speed and getting ready to feel a bit of a jolt as one rolls over it.

The “U” stands for “Underneath.” Clark notes that on the underside of the car, there’s a chance that damage could be done to it. Thus, after going over a pothole, try to listen for any sounds suggesting that something might have come loose.

“M” stands for “Move on.” In the event that damage was done to the car, Clark says there’s no sense in dwelling on it. If a repair is necessary, take into the shop to have it fixed.

Alternatively, if the repair work is significant and pricey, it may behoove policyholders to get in touch with their vehicle insurance Ontario provider. Depending on the policy, motorists may be able to be compensated if the repair is more expensive than the deductible.

Finally, “P” stands for “Prepare yourself.” Preparing can be getting ready for what could be an expensive bill or taking the appropriate actions with one’s insurer so that the damage can be covered, such as by filing an insurance claim and explaining the details of what happened.

Many provincial governments have spent millions of dollars trying to rid the city’s streets of potholes. Yahoo Canada reports that Quebec spent $2.5 million for pothole repair in 2010 alone.

How to handle pothole-infested roads 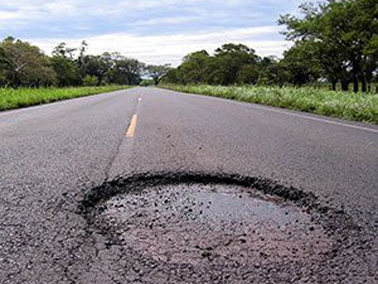 Spring in Canada brings with it pothole season. Here’s how to deal with them.