Skip to Content
null
null The cost of bad driving

Everyone’s had the misfortune of being stuck behind a pedal-happy driver. We can all agree that hard starts and stops and sudden turns are annoying, but are they really dangerous? The answer is yes: They’re big risk factors in road accents, especially those involving pedestrians.

The statistics speak for themselves. In Quebec, in 2013, 65 pedestrians were killed and 2816 were injured from motor vehicle collisions. Cyclists are also victims of accidents: 13 people were killed, 88 were seriously injured and 1853 were slightly injured in 2012. According to Transport Canada’s 2012 report “Canadian Motor Vehicle Traffic Collision Statistics”, 312 pedestrians and 61 cyclists were killed in collisions with cars.

These kinds of bad driving habits, most of which can be chalked up to negligence or distraction, put everyone’s safety at risk.

Did you know that abrupt stop-and-go driving actually eats up more gas? And while we might be enjoying low pump prices right now, we certainly can’t expect them to stay that low forever.

Smooth driving is the key to good car health. The harder you drive, the more often you’ll find yourself shelling out for new tires, oil changes, brake repairs and maintenance for other prematurely worn parts.

In Quebec, some bad driving habits are actually offences under the Highway Safety Code and could cost you a few demerit points. Here are some examples:

In Ontario, some bad driving habits are actually offences under the Highway Traffic Act and could cost you a few demerit points. Here are some examples:

You don’t want to feel rushed behind the wheel. Leave home a little bit early and concentrate on your driving, instead of the clock. You’ll be glad you did!

Added bonus: Concentrating on the road and manoeuvring more smoothly make for a much less stressful driving experience. Good driving can be good for your health!

Need to drive off some steam?

There’s nothing like zipping around the track at your local go-kart course. What better place to get all your speeding out of your system than somewhere no one will tell you to slow down? Whether you’re racing against your friends or just trying to beat your own best time, it’s a great way to let off some steam without stressing out your fellow drivers.

The cost of bad driving 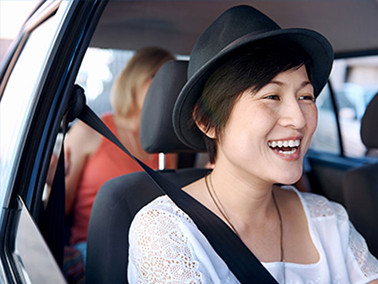