And because commutes tend to be long – particularly for those who live in rural areas but work in the city – the quicker they get home, the better.

Once motorists get to their neighborhood and are about to pull into their driveway, the easiest thing to do is to pull in head first, as it’s quick, easy and requires minimal effort.

However, according to the automotive experts at Wheels.ca, while parking frontwards is the most common way of pulling into a driveway, it’s the wrong approach to take.

There are several reasons why this is the case, the main one being how difficult it is to back out into traffic when leaving the house each morning.

Some people have the luxury of having a driveway that enables them to turn around and exit their driveway frontwards. For most, however, the driveway is just large enough to enter or exit one way. And for people who park head first, the only way to leave is by backing into traffic.

Wheels.ca notes that some people find no problem doing this, as in rural settings, traffic is minimal. Because of this, motorists will often back out of their driveway without looking in either direction to see if anyone is coming. This has led to several accidents and fender benders, some of which have required filing a group auto insurance claim.

To enter and exit a driveway correctly, Wheels.ca offers the folllowing tips.

Once motorists are about to enter their driveway, pull over to the right just past the entrance, allowing any cars that are behind to pass. After ensuring traffic is clear and there aren’t any pedestrians in the area, carefully back into the space, constantly looking behind and in the reflecting mirrors to ensure the vehicle doesn’t hit something or roll over an obstacle.

Backing in not only makes for an easy way to leave the next time the car needs to be used, but it provides a better field of vision so drivers can see both directions, the automotive website indicates.

While it’s legal to back out of a driveway onto a street, the same can’t be said for backing out onto a highway that’s divided by a median strip. Wheels.ca notes that under Section 157 of the Highway Traffic Act, motorists are forbidden from backing a vehicle onto a road with a posted speed limit of 80 kilometers per hour. Drivers can also not move in reverse if they are parked along the shoulder of the road.

Ideally, the website notes that parking and leaving a driveway involves entering frontward, turning around in the driveway and then exiting the same way that the driver came in. But because this is often impossible to do, Wheels.ca says the next best option is backing in, as it will only add an extra minute or two onto a motorist’s daily commute.

Why backing into a driveway is preferable to entering head first 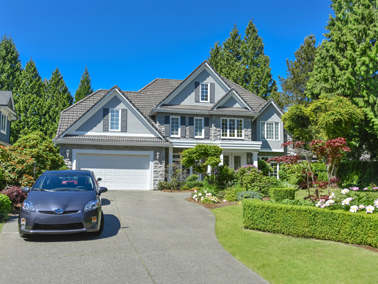 After a long day at the office, people typically get into their cars, jump on the highway and hopefully make it home without any type of accident or issue.