In Toronto, the High Occupancy Vehicle (HOV) lanes are specifically designed to eliminate traffic congestion and allow for more people to move smoothly through high-traffic areas. When using the HOV lanes you’ll arrive at your destination much quicker. Use these additional carpooling tips as your guide to a productive and less stressful commute.

Carpooling can save you hundreds of dollars a year on gas and overall car maintenance. Owing a vehicle is the second-largest expense in most households. According to The Canadian Automobile Association, owning and operating a car costs approximately $9,000 per year. With carpooling, you can share the cost of gas and parking and reduce car expenses from 50% to 70%.

Less vehicles on the road will reduce air pollution and Greenhouse Gas (GHG) emissions. Carpooling allows fuel to be used more efficiently and is a productive step towards having a cleaner and greener society. Environment Canada reports that air pollution caused by vehicular travel is linked to a number of health concerns including respiratory diseases, cardiovascular disease, allergies and neurological effects. If carpooling can help minimize air pollution, we should offer our co-workers a ride to work more often!

The more the merrier

As humans we love to socialize, and carpooling can be a terrific way to get to know your co-workers better or meet new people. Even before stepping into the office, you can gush about the new show you binge-watched on the weekend or how beautiful the weather was. Or you can have your own version of James Corden’s “Carpool Karaoke” and jam to some tunes.

Living in the digital age comes with some added benefits, including the choice of ride-sharing apps and websites we can use to split the cost of a ride. There’s the popular uberPOOL and BlancRide apps, Kangaride, which is mainly for longer commutes such as travelling to Montreal and Ottawa, and the Carpool Toronto (ON) Ontario Rideshare and Smart Commute websites, which connect users with free rideshare listings. With all these resources available, it’s easy to find people to carpool with.

If it’s your turn to be the passenger in the carpool, you can make the most of your commute time. If you haven’t had your morning coffee yet and don’t feel like conversing, you can check and respond to emails on your phone, catch up on the news or post on social media. There might even be time for a short snooze

How to organize a carpool

If you’re thinking of carpooling, talk to your co-workers and neighbours and see if anyone is interested in the idea as well. Determine whether there will be one destination pickup point or if it’s door-to-door service. The Ministry of Transportation of Ontario provides free parking lots near dozens of highway interchanges throughout the province. Create a schedule for the week of who will drive, what the route will be and other logistical details. Establish a few ground rules as well, such as no smoking, whether eating is allowed in the car, etc. If you’re feeling doubtful, a trial run could be done for week to make sure it’s going to work for all the carpoolers. Or you can take the digital route, and book a rideshare with your mobile app of choice once or twice a week. 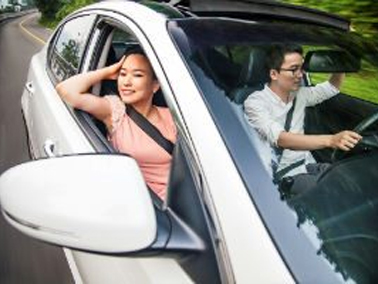 Even for a few days a week, carpooling can be a smart way to commute to work.