Skip to Content
null
null Your Guide to City Driving

But, despite what first glances suggest, these zones of organized chaos do adhere to the same rules of any community. However, there are also a loose set of city driving guidelines not found in any driver’s handbook.

Need help navigating those busy city streets? Use this set of tips as your guide to stay safe behind the wheel.

Efficient driving is the key to good city driving. Before you get behind the wheel, look up your destination on a map and plan out the best route for getting there. Note one-way streets and look up traffic reports before setting out. Look for any events or construction projects that may hinder your progress.

Planning an effective route also involves timing. If possible, avoid driving during rush hour. Depending on the city, there are usually two rush hour periods: one in the morning between 7:30 a.m. and 9 a.m. and a second from 4:30 p.m. until 7 p.m.

Get Acquainted With Local Traffic Culture

Different cities have different local traffic cultures or rules: it’s wise to become acquainted with these so that you can navigate the city as smoothly as possible. For example, turning right on a red light is illegal on the island of Montreal, and idling on main Toronto arteries during peak traffic periods is generally frowned upon. Getting acquainted with local traffic rules can help spare you from a potentially dangerous situation, or a traffic ticket.

What’s more, urban driving confrontations are an unfortunate reality of driving in the city. The best thing that you can do is to avoid confrontation altogether. If a confrontation cannot be avoided, keep calm and do not allow the situation to escalate. Remember: there are many ways to deal with aggression on the road without losing your cool.

For example, if someone is blaring their horn behind you, do not panic or react on impulse. Stay calm and observe your situation carefully. If at any point you do not feel safe, pull over and let the impatient driver pass.

Several key signs to look out for are:

When stopped at a traffic light, look ahead to see if there are any changes or obstructions on the upcoming city block, such as parked cars or construction. Since a green light does not necessarily ensure safety, practice extra caution before proceeding into an intersection.

As you get closer and closer to a city’s centre, you will inevitably encounter more and more pedestrians. In Canadian cities, rules protecting pedestrians are vast and must be obeyed at all times. As a driver, it is your responsibility to be aware of your vehicle’s immediate surroundings and to maintain a high degree of safety: this includes being aware of pedestrians in your near vicinity and driving at a safe speed.

While all users of the road are expected to obey traffic rules, accidents do happen. When accidents involve cyclists, consequences escalate exponentially. Like pedestrians, you should always be on the lookout for cyclists. Not only do cyclists share the road with you, but they do not have the added protection of being encased in a vehicle.

Things to look out for with cyclists:

Just as there are bad drivers, there are bad cyclists too. Look out for cyclists who run red lights, run ‘Stop’ signs or who just are not paying attention.

Your Guide to City Driving 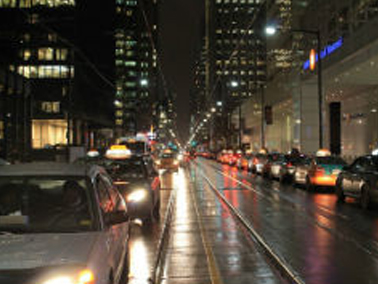 With endless lines of traffic, weaving cyclists, and criss-crossing pedestrians, cities can appear intimidating to those new to urban driving.